The last two years have seen a major shift in IT towards Working from Home and remote access to systems. Because of lockdowns, and the closure of physical outlets, the pandemic has closed some businesses and forced others to move to e-commerce.

Two major disadvantages of Working from Home include the increased communications costs with the staff member, and a feeling of remoteness and isolation when they don’t interact with team members and other members of staff regularly in person.

Many businesses have already installed VoIP to take advantage of the cost and operational benefits of a Unified Communications platform. If the company has a high-speed and stable Internet connection, and most with e-commerce will, it is easy to use the corporate VoIP system to extend communications to staff Working from Home to overcome these problems.

How Does VoIP Work?

Simply put, VoIP is the use of a digital network to carry voice traffic instead of a legacy cabled system. If it is linked to the Internet, a VoIP installation can provide cost-effective local and remote communications between individuals and offices. Using a video-conference extension increases the personal qualities of the interaction.

It can be implemented using in-house equipment, or as a service provided by a managed service provider. Some equipment cannot operate digitally and will need replacement. Others will need new device drivers if any exist. These are typically modems, alarm system devices, and some printer/fax machines.

An alternative is to define them in the VoIP environment as analogue devices, and have all traffic to and from them routed automatically to an analogue connection to the PSTN. 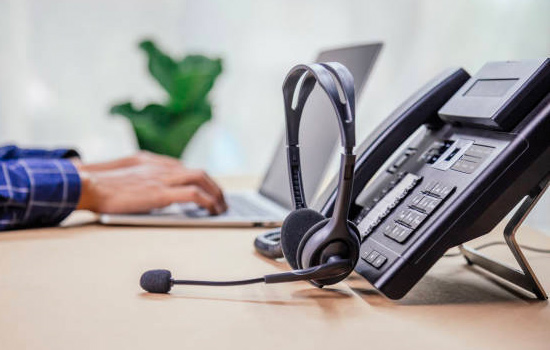 The first and most obvious benefit is in the reduction of communications costs. Moving voice, and perhaps video traffic onto the Internet, bypass the toll charges normally levied by the PSTN operator. Where an organisation has remote workers, this can be a substantial saving. If the organisation regularly makes long-distance and international calls, the savings can be even greater.

The second major benefit is in staff welfare. As mentioned above, staff used to an office environment, but now working from home often feel remote and isolated because of the loss of interaction with colleagues. Using VoIP, in effect with no cost restrictions, brings them back into contact, and if the medium is extended to include video conferencing can bring an immediate improvement in staff morale.

A virtual number is a programmed VoIP phone number not linked to a specific telephone line or specific device. A device could be a physical handset, a smartphone, or a software application. An organisation can use virtual numbers to have several phone numbers associated with a single phone line.

As an example, a virtual number could be assigned to “ Project Team A” and the VoIP System would simultaneously ring several numbers associated with the team leader and team members. The real numbers could be local or remote.

Customer calls can be programmed to look like the customer is dialing a local number, but the call is answered on the other side of the world at no additional cost. Regional and international calls can be automatically routed via toll-free Internet links. In that way, Individuals can be reached anywhere, anytime, on a variety of devices at little or no additional cost. This is a boon to working from home since the remote staff member can be in contact and be contactable using a virtual number at little or no extra cost.

Because virtual numbers are not tied to a specific device, departments, teams, and individuals can be reached by always dialing the same number, irrespective of where they are working from and who is to answer. Similarly, individuals can be automatically reached in the office or elsewhere. Again, this feature eases keeping remote staff contactable with no additional cost.

Virtual numbers allow implementation of call forwarding, call attendants, integration with SMS and email, even call conferencing and video conferencing. If the VoIP system is cloud-based, then it is possible to have employees anywhere in the world assigned an organisation’s internal extension number.

Call logging and virtual numbers allow close control of call costs, by logging who called where and when, and at what cost. Having a security profile associated with a virtual number rather than a physical device prevents local and remote users from breaking out and making unauthorised calls to regional and international PSTN numbers.

In summary, using VoIP can be of great benefit in s supporting staff who are working from home.

However, an organisation often concentrates efforts on having the VoIP system replace the existing PSTN system, and leaves some of the more advanced features until later. In the case of using VoIP to alleviate the effects of working from home, this can be an expensive delay.