Part of the process is selecting the correct VoIP phone type for each user for a range of mobile and desktop units.

One of the first steps in any Cloud VoIP implementation is to determine where VoIP handsets will be needed, the type of handset, and if the supporting infrastructure is available at the installation point.  The two main types of handset are software applications on smart devices, and physical handsets connected to a cabled or WiFi network. 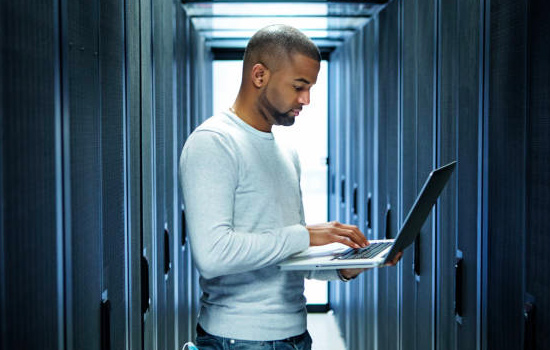 VoIP handsets need to be connected to the business network and from it to the Internet to allow internal and external VoIP calls. Obviously, there must be a digital network in place.

The network connection can be using a standard Ethernet cabled connection, at a cabling level of Cat5e or above. Recently WiFi adapters and handsets with a WiFi capability have become available for use in a WiFi environment.

For a cabled network the usual connection is from the network point to the handset, and from the handset to the desktop computer. It depends on the implementation, but a WiFi enabled handset may not need to be connected to the computer.

The server infrastructure supporting VoIP can be inhouse, or as a Cloud VoIP implementation, outsourced to a managed service supplier.  For a very small business VoIP can be a network connected PC running PBX simulation software.

Be aware that some devices cannot be attached to a digital network, including older alarm systems, fax machines and modems. They need an analogue connection which can be programmed in the VoIP system or one that bypasses  the VoIP network to connect to an existing analogue PSTN connection.

Physical handsets also need power. It can be provided using Power over Ethernet (“PoE”), where the power is delivered over the network cabling, or by a power brick plugged into a po[]=wer point at the wall. For a WiFi implementation where there is no physical connection, a power brick will be needed.

PoE needs PoE capable switches, so some older switches might not have that capability. They can be replaced, or a more economical way might be to use power injectors that add PoE to a network.

Clearly, a power brick needs a power point, so some electrical installation work might be needed, but this is unlikely if there is already a cabled network connection and a desktop computer at the installation point.

The preinstallation planning needs to look at all the places where a physical handset is needed and make sure that it has power and network connectivity. PoE capability also needs to be checked. 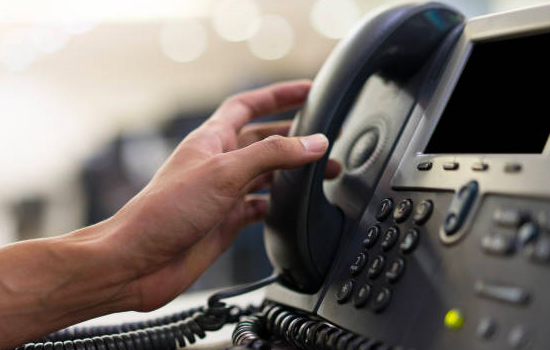 Handsets come in a variety of different types and styles. They can be physical handsets sitting on a desk or attached to the wall. Using SIP technology allows smart devices running an app to simulate a physical device.

Physical handsets range from a very simple device with only a keyboard, to highly sophisticated programmable handsets with built-in video-conferencing screens and hands-free audio.

There are also ruggedised handsets specifically designed for adverse environments, for example handsets on a factory floor with very large buttons on the keypad for use by gloved fingers.

The type chosen will depend on the user and their business requirements and is defined during pre-installation planning. 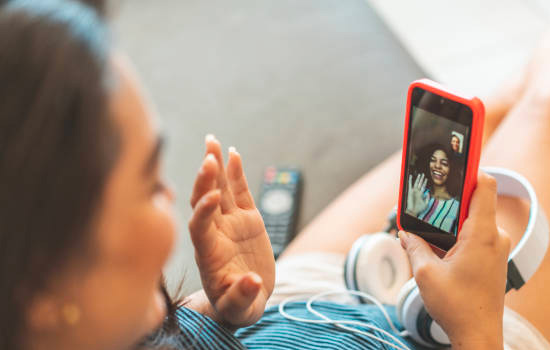 Some people, for example, managers or executives need to be always in contact. In a large environment, for example an educational  campus or large factory, this could be problematic. However, if the VoIP implementation includes support for the SIP protocol on the VoIP server, this can be achieved. 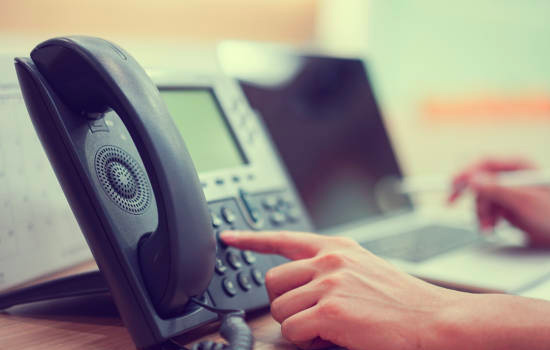 The type of physical handset installed will depend on the business needs of the user. All will need to be able to make and receive calls within their permission levels, and to access personal and corporate phone books.

For simplicity, most organisations have three classes of user, mobile, executive and basic. Mobile users obviously use smart devices.

Executive users need access to advanced features on the handset. These usually include programmable buttons that carry out common tasks such as call divert to voicemail, call transfer and call-pickup. One often used by executive secretaries is call screening, where they automatically pick up calls to the principal.

Basic users need only to make and receive calls.

Choosing the best handset means implies a knowledge of where a handset is to be sited, who is likely to us it, and their business requirements.

The last two years have seen a major shift in IT towards Working from Home and remote access to systems. Because of lockdowns, and the closure of physical outlets, the pandemic has closed some businesses and forced others to move to e-commerce.

Two major disadvantages of Working from Home include the increased communications costs with the staff member, and a feeling of remoteness and isolation when they don’t interact with team members and other members of staff regularly in person.

Many businesses have already installed VoIP to take advantage of the cost and operational benefits of a Unified Communications platform. If the company has a high-speed and stable Internet connection, and most with e-commerce will, it is easy to use the corporate VoIP system to extend communications to staff Working from Home to overcome these problems. END_OF_DOCUMENT_TOKEN_TO_BE_REPLACED

VoIP for Business has become commonplace in the business and personal marketplace.  Most businesses use it, bringing them many benefits.  The increases in Increased remote working and working from home following the restrictions imposed by the pandemic has meant many more small businesses using VoIP for Business.

Originally VoIP meant a level of expense that put out of the reach of the smaller business, but shelf-units and PC-based virtual PBX software have brought VoIP for Business well with the reach of even the smallest business and SoHo users.   The increasing availability of Internet access, especially the roll-out of fibre to the home, is also providing benefits to digital telephony. That has, in turn, driving a need for VoIP in smaller businesses.

Before VoIP, whenever an employee left the building they were by and large uncontactable, with the possible exception of catching them at a client, at home in the evening or in their overnight accommodation. This meant communications between staff, the office, and each other were difficult at best.  All that has changed with the advent of affordable Business VoIP. Simply put, with Business VoIP and its inbuilt video-conferencing capability, individuals and teams need never be uncontactable, inside or outside the office. It is now possible to be truly mobile.

END_OF_DOCUMENT_TOKEN_TO_BE_REPLACED

In recent times, multimedia, voice and video conferencing have come together to create an entirely new form of communications.  A key element of this new wave is Voice over IP, (“VoIP”), a protocol for digital transmission of voice and video.

Home and business VoIP telephony has grown to be a major segment in the VoIP market. It provides advantages in cost, mobility and increased functionality with a range of compatible devices.

Why should a business user consider moving to a VOIP for Business telephone system?   There are justifiable concerns, mostly over call quality, but also that that they will lose their phone service if they lose power, and that it is a difficult and costly technology to implement.

However, improvements in technology and the use of standby power go a long way to alleviating these concerns. Simply put, the advantages to businesses from adopting a VoIP for Business solution far outweigh any potential drawbacks.

END_OF_DOCUMENT_TOKEN_TO_BE_REPLACED

VoIP Solutions have been enthusiastically embraced by individuals and businesses. For some, it is no other reason than the substantial cost savings in moving from the tolled PSTN network to toll-free internet connections. There are, of course,  other benefits in improvements in operational processes and customer service levels.

One of the strategic moves forced on IT by the events of 2020 has been the move to remote working. Resources have been diverted from planned projects to emergency projects to enable the transition. VoIP Solutions have been a significant growth element, either as new implementations or developing an existing Unified Communications Strategy.

One question that is often asked, particularly in the education environment, is whether VoIP Solutions make a positive contribution. The answer is a resounding YES, and not just for Education. Any campus style, multi-building, or multi-site environment will benefit. END_OF_DOCUMENT_TOKEN_TO_BE_REPLACED

The universal adoption of the Internet has led to the use of digital communications as a standard part of the business environment. Most companies are creating and implementing digitally based unified communications strategies incorporating VoIP communications built around VoIP phones, video conferencing and perhaps CCTV as integral parts.

They are doing this to take advantage of the business benefits to be gained from moving from the unlinked analogue systems to an integrated digital platform. The simplest example is the use of VoIP phones to transfer from tolled calls over the PSTN to essentially free voice communications over the Internet.

There are many other reasons to make the switch from a legacy analogue phone system to a digital VoIP system, both financial and operational. END_OF_DOCUMENT_TOKEN_TO_BE_REPLACED

It’s not a question of if, but when a disaster will hit your company.  A prudent company has a disaster recovery plan, covering all components of recovery, and including a public relations/communications plan.  It should also include various scenarios for keeping the company running normally as far as is possible while the full recovery process unfolds.

In short, not disaster recovery, but business continuity.

Obviously, the recovery steps and how long it takes to implement them depends on the nature of the disaster.  However, all have the common theme of an interruption to normal business that needs to be managed. END_OF_DOCUMENT_TOKEN_TO_BE_REPLACED

The benefits that VoIP for Business can bring to your business are undeniable.  Add to that Cloud VoIP, hosted or on-site  and you have a winning combination that can add significantly to your business profile.

Depending on the size of the business, either implementation can be applicable.  However, having said that, a cloud-based approach can fit more easily with an existing cloud-based environment, either on‑site or hosted.

Before choosing a particular approach, it is best to consider firstly whether on-site or hosted VoIP is better suited to the business, and secondly, whether a Cloud-based architecture is appropriate. END_OF_DOCUMENT_TOKEN_TO_BE_REPLACED

The management, financial and business benefits of VoIP are well-known and many businesses, both large and small, have adopted VoIP solutions to enhance their business profile.  As usual however, once Business VoIP is implemented, businesses find other benefits from their VoIP Solution that help business growth.
What are the leading trends that are driving business growth today? END_OF_DOCUMENT_TOKEN_TO_BE_REPLACED

Unless you have been living on a desert island, you will have read in the media about Voice over IP (“VoIP”) Business phone systems and knowingly or unknowingly used one.  Why doesn’t your business have one?  Does the cost put you off?  Does the technology worry you?  Does the switch from the Plain Old Telephone System (“POTS”) to a digital Business Phone System worry you?

Here are six reasons why you should switch to a VoIP Business Phone System in 2018. END_OF_DOCUMENT_TOKEN_TO_BE_REPLACED

Choosing the Best Cloud Provider: A Guide on How to Find ‘The One’ that Matches Your Business Appetite